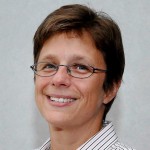 Davis attended Ball State University’s Honors College, earning a bachelor’s degree in journalism, and spent more than 20 years as a reporter and editor at newspapers in Indiana and Florida. She won several national awards during her 13-plus years at the Indianapolis Business Journal, where she also established the popular North of 96th suburban news bureau.

A 2014 graduate of the Hamilton County Leadership Academy, she now serves on its board of directors and chairs the communications committee. She retired from her homeowners’ association board after six-year stint, including two terms as president. In her free time, Davis enjoys playing poker and obsessing over IU basketball.

She and her husband, Bob, live in Fishers with their three “used” cats: Linus, Lucy and Toby.

“I am thrilled to be working with such a great group of people on an issue as important as affordable housing,” she said. “I can’t wait to start making connections out in the community.”